LESS IS MORE: Dances at a Gathering vs. Psyché (plot summary)

The choreographer Jerome Robbins, who died in 1998, considered the Paris Opera Ballet his second (third?) home.  He adored coming here to personally coach our dancers.  Only the New York City Ballet, his home base, has more of his ballets in its active repertory.

Creator of over 60 ballets and co-director – with George Balanchine – of the New York City Ballet, Robbins lived a triple life: commuting between Lincoln Center and Broadway and Hollywood. As the dance-maker, director, or “doctor” of many of the greatest musicals – such as On The Town, Peter Pan, Gypsy, Forum, Fiddler, and most famously, West Side Story — Robbins earned 5 Tony Awards and 2 Oscars.

That his musical, The King and I, is now playing at Paris’s Théâtre du Châtelet and his ballet “Dances at a Gathering” can be caught at the Palais Garnier, highlights this multilayered legacy. Whether his dancers wore 19th c. imperial Thai headdresses or wispy chiffon and pointe shoes, Robbins always sought ways for movement to seem a natural extension and expression of a deeper narrative.  An instinctive storyteller, even his most plot-less ballets betray glimmerings of plot.

Alexei Ratmansky, one year old when Robbins’s Dances premiered, grew up in the Soviet bloc in an atmosphere where the old-fashioned (such as the big 19th century narrative ballets at the Bolshoi) held on by its toenails.  During his youth, it had become possible to take peeks at bits of the glamour of the abstract plot-less-one-act and the decadent musicals of far-off America

Abstraction has long been justified by the joke that our vocabulary of leaps and spins does not quite include the words for “this is my mother-in-law.” But nowadays, the story ballet has come back into fashion.  Ratmansky’s challenge is to craft steps and combinations that will speak to you without a word being spoken. Especially as the story of Psyche revolves around her…mother-in-law. 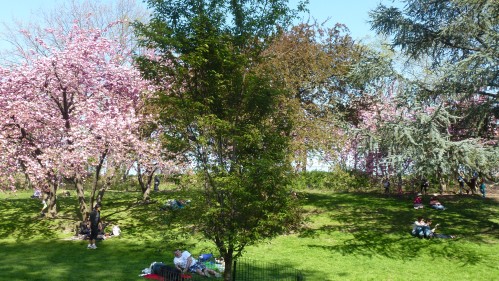 NYC, Central Park. A blue sky with shades of green and purple…

There is an irony to be found in fact that the storyteller Robbins’s ballet masterpiece has no plot.  Circumstances, and a bit of stress fatigue, dictated its construction according to dancer lore.  Too respectful of the guru Balanchine’s authority – who nevertheless always assured that his co-director had access to rehearsal space at the New York State Theater – Robbins, feeling the urge to take on Chopin, never seemed to have insisted upon a normal rehearsal schedule. Instead he noodled around (to put it mildly: tried, discarded, reinserted, agonized, tortured both steps and bodies) with whatever dancers whenever they had a half an hour to spare. Each half-an-hour was used to carve out perhaps thirty seconds of steps to be reworded later…  The structure of “Dances” reflects its episodic – almost anarchic — birth.

Crafted by and for specific American dancers, this ballet in fact carries more than a hint of Slavic soul.  Of the seventeen sections, lilting mazurkas – a Polish dance in swift triple time  -dominate eight of them.  Little gestures such as a click of the heels, one arm akimbo while the other sweeps grandly up and out, a tilt of the head, all bring folk dance to mind.  One could find further irony in that while every bit of Chopin’s music tickles your feet and emotions, the dance pieces he inspires remain mysteriously both full and empty of story, including the very first abstract ballet ever, Fokine’s 1907 Chopiniana.

In the end, the story is that there is no story, as life really has none either: “In the room the women come and go, talking about Michelangelo.”  Think of this ballet as not merely something to watch, but as snippets of ongoing conversations caught on the sly…just let your eyes follow someone around this picnic on a late summer afternoon on Sheep’s Meadow in Central Park or on the banks of Chopin’s native Vistula. The boy in brown or green or violet; the girl in yellow or blue or mauve…pick one or two or three and amuse yourself by imagining which one you would want as a relative.

By the way, Robbins broke new ground by finally daring to reject the supremacy of  never-perfect orchestral accompaniment. He plonked a simple rehearsal piano on the apron of downstage right.  Basta! Until his piece – and that same year, Eliot Feld could have claimed to have gotten there first in his haunting Brahms-inspired sextet Intermezzo– ballet always meant puffy music.  Balanchine, bless his heart, certainly brought out the best in Stravinsky but – for Christ’s sake – do Gershwin’s songs really need to be pumped up by Hershey Kay?

Maybe.  For some odd reason, be it lack of cymbals or symbols, a portion of the audience always nods off during the understated moods in “Dances.”  Too soft, not dramatic enough.  It’s like the way Mozart snoozes some people out. In either case, I’ve yet to figure out why.  Unless…

There is a key moment late in the ballet when The Boy in Brown, watched by the others, kneels and stretches out his hand to softly caress the floor.  There lies the story, and the reason why dancers love this ballet more than earthlings: it’s about being home.  Regular families get together on Sundays in parks and playgrounds; the family of dancers gathers daily in the studio. Each performance together, then, is their version of Thanksgiving.

Created for the Paris Opera Ballet

While “Dances” boasts of no plot, no orchestra, no sets, no fancy costumes, and all depends on the subtle flick of a dancer’s wrist…here you have got the whole nine yards.  Big loud music with chorus that keeps thundering along from climax to climax.  Whoop-de-doo sets, almost psychedelic in impact and certainly unnerving, by Karen Kilimnik. Adeline André’s flower-powered costumes will certainly give you something to talk about after the show.  Your discussion may center, however, upon whether the arrangement of steps helped or hindered the narrative.

Here follows a summary of Apuleius’s 2nd century telling of the story of Cupid and Psyche, with hints as to how it is staged tonight:

Once upon a time in ancient Greece, Venus – the goddess of love – grew very angry at a king (we never see him).  But was it his fault that the youngest of his three daughters, Psyche, had been blessed with such spectacular beauty that men came from far and wide just to stare at her?  Was it her fault that these men forgot all about keeping the fires lit in Venus’s temples? (hint: smoke rising).  Compared to Venus (in red), when it comes to vanity or bossing people around, Snow White’s stepmother was a pussycat.

She sends her son, Cupid, to put a stop to this annoying situation (this is about where the ballet starts)While his mission is to use his magic arrows to make Psyche fall in love with the ugliest creature on the planet, once Cupid sets eyes on her…guess what happens.  The problem, then, is how to get around mom.

Cupid concocts a plan.  First, he renders all men indifferent to Psyche’s looks.  Time passes and everybody – including her sisters – gets married.  The king, confused, seeks advice from Apollo and leaves horrified by the god’s instructions — which of course had been planted by Cupid.  The king must leave Psyche, dressed in mourning (black chiffon), on a mountaintop where she will be united to – or perhaps devoured by — a monster.

Obedient, fearful, bathed in tears, Psyche falls asleep while awaiting her fate.  But instead of a monster, four Zephyrs – the gentlest of winds, dressed in ripped shower-curtains – appear and waft her (now in sparkly pastel chiffon) away to a magical flower-filled meadow alongside a stream.  In the distance she can see a palace fit for a god, covered in gold and silver.  Soft and disembodied voices tell her to fear not and to await the arrival of her new mate at nightfall.  That would be Cupid.

In the dark, she cannot see her lover – and has been warned that she must never look upon him (blindfold) – but realizes that this cannot be a monster (during a pas-de-deux cleverly devised so that the dancers never look at each other, a real challenge as eye-contact provides a huge help in partnering).  And so the blissful days and nights pass, until Venus finally figures out what’s going on.

Uh, oh. Venus sends Psyche’s two sisters to plant seeds of doubt in her mind. (These are the two girls with fidgety movements dressed in violent blue and acid green topped with fright wigs).  Psyche, like Belle, hasn’t talked to a real person in ages and proves vulnerable to her sisters’ insinuations.

On their advice, Psyche prepares a lamp and a knife – should her bedmate indeed turn out to be a winged serpent with fangs– and waits for dark. Upon discovering Cupid’s shattering beauty, her hands begin to shake and a drop of hot oil lands on his shoulder.

A moment later he vanishes, having whispered that “where there is no trust, love cannot exist.”  Psyche, in despair, begins wandering through hill and dale.  It takes her a while to figure out that Cupid has run home to mommy.  The only solution is to kneel before her mother-in-law and humbly beg forgiveness.

Not so easy.  Claiming that Cupid hovers between life and death from, like, something that can be solved with a Band-Aid, Venus devises all kinds of impossible tasks Psyche must first perform as penance (hopefully failing or, better yet, dying in the process).

But all kinds of kindly creatures decide to help or at least do no harm (insects, sheep, dogs, eagles, plants).  Since the premiere almost three years ago, the costumes have been toned down.  The girl Flowers still look like flowers. But the Animals and Insects no longer wear the obvious, only the boys’ spastic gestures are left to clue you in as to what species (I kind of miss the loony giraffe costume).

As she does when depressed, Psyche falls asleep again. (Sent to hell by Venus in order to ask to borrow Persephone’s beauty secrets Psyche, figuring that she must be looking pretty worn-out by now, can’t resist peeking into the box which contains…sleep).

Finally cured, Cupid is ready to forgive Psyche but…only once Jupiter agrees to grant her immortality and Hermes carries the girl up to Mount Olympus (we see neither) will Venus relent (air kiss).

Thus love (Cupid/Eros) is eternally united with the soul (what the word “psyche” literally means).  By the way, Psyche’s emblem in art is the butterfly, which seems to be missing from the decor. 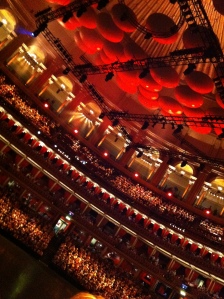 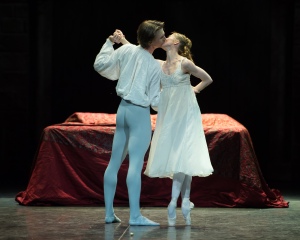 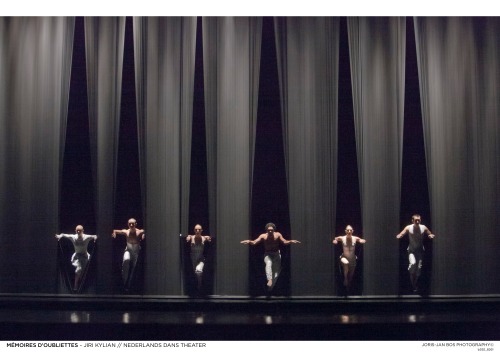 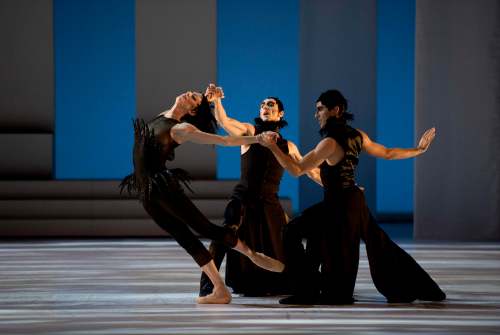 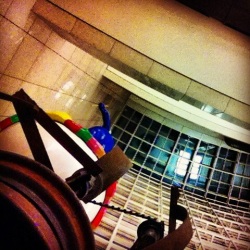 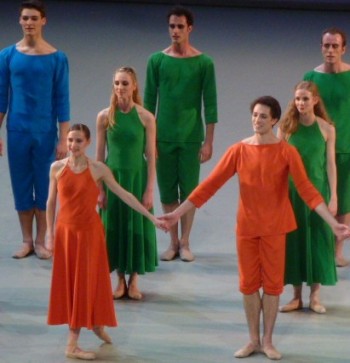