What does an abstract ballet have in common with one that tells an old-fashioned story?

The fact is, all ballets are always built upon the same basic vocabulary of steps. Yet all ballets serve to honor the gorgeous technique that dancers – both artists and athletes — never stop developing. They challenge themselves in order to challenge us.

Our audience doesn’t need 3-D glasses. For here they whoosh before us, exaggerating the sensations of being alive, literally carving space out of space: these marvelous dancers, defying anything we could possibly imagine on our own.

George Balanchine’s (1904-1983) vocabulary certainly proved infinite [425 ballets] After fleeing the turmoil of revolutionary Russia, he danced and created works for Serge Diaghilev’s legendary troupe of exiles, Les Ballets Russes. Dispirited by losing his chance to direct the Paris Opéra Ballet, Balanchine left for the United States in the early 1930’s. There he would create a school in order to create his own company. Both continue to perpetuate his legacy. But more than that, he changed the way we think about ballet.

After the Russian Revolution and civil war, Balanchine found himself stranded in Paris. He soon was adopted by the Ballets Russes, whose impresario, Serge Diaghilev, paired the budding choreographer with equally talented musicians such as the crochety composer Serge Prokofiev.

Here we have a chapter from the Gospel of St. Luke stripped down and fluffed up – literally and figuratively – older brother who stays home cut, sexy siren added.

So there’s this cute young guy, fed up with his droopy father – that beard! those ponderous gestures! – and his droopily conventional sisters. He decides to demand his inheritance and go out to experience the world. He vaults over the fence that keeps him from being free in a marvelously airborne moment. (Today he would leap onto a cheap airline destination Barcelona…or Madrid).

In a bar, he meets a bunch of weird guys with shaved heads (what’s so 1929? Go out drinking tonight and take a good look around you). A mysterious woman (aren’t we all) chats him up. She blows hot and cold, wields quite the hat and can do amazing things with her long red velvet cloak. Ooh. This must be heaven.

So is that all that will happen to young college students on their junior year abroad at a bar in some exotic location? Noooo. The following: after getting drunk and seduced they might just wind up stripped and naked and left for poop while their fairweather friends sail away.

What will save such young men, even if literally broken down? That anthem from the Wizard of Oz: “there’s no place like home, there’s no place like…” actually does work, as it turns out. Hitting rock bottom frees you to finally figure out who you really are.

Deeming this kind of linear and figurative structure too cheesy, Balanchine would avoid easy narrative for the rest of his long life. After putting this ballet into the closet for twenty years, Balanchine reluctantly revived it only when the explosive powers of a male dancer inspired his respect: men like Jerome Robbins or Edward Villella. Damian Woetzel kept the flame alive, many of the Paris dancers do too.

Women, like sunflowers, find their faces drawn towards a strong light that bathes them from stage right. Then they remember who they really are, concentrate, and snap into first position. First position is where dance, and a dancer’s life, begins.

Trained at the Maryinsky School in Saint Petersburg, Balanchine was costumed as a tiny cupid in The Sleeping Beauty the first time he set foot on stage. Smitten by the sounds and movement, throughout his career Balanchine never failed to mention his debt to that ballet’s choreographer, Marius Petipa, and his adoration of the composer Tchaikovsky.

This elegiac piece distills the essence of what we think about when we think about ballet, that glorious genre created in France: elegant and mysterious sylphlike creatures clad in long and fluffy tutus who dance by the light of the silvery moon. There is no story – what Balanchine once safely in the U.S. – began to deem, and reject as, “extraneous narrative.”

One of the first ballets Balanchine created in America, Serenade owes many details to the fact that he had to work on a deadline (the premiere would be given at the estate of a financier – and potential donor – in the New York suburb of White Plains). He faced using all the 28 dancers registered at his school. Only seven showed up today? A section for seven. A girl falls down? A girl will fall down. A girl’s hair spills out of her chignon? Guess what. Most of all, music guides the movement. More than that: it frees them to move.

There is a role which dancers have taken to calling “The Dark Angel.” But why? Like the rest of the ballet, the reasons the dancers move to the music seem mysterious and random. If one ballet exists that could be described by Arletty’s legendary cinematic sigh, “atmosphère, atmosphère,” this is the one. In L’Hôtel du Nord her voice betrayed quite the hint of exasperation. Not here. Every person I know who has ever taken a single ballet class becomes enslaved by the beauty of the steps, dying to dance while at the same time choking down a few tears for no logical reason.

Be patient, you non-dancers. Suddenly, at some odd moment, you will fall in love with dancing.

As far as those who grew up in those regions once at the forefront of ballet knew – the one Diaghilev and Balanchine left behind, that part of the world Stalinism turned into a laboratory for the sentimental treacle and ‘6 o’clock’ robotism we now call the “Russian style”– ballet remains defined by semaphored emotions, gymnastic values or, at the very least, encased in elaborate ethnically and historically-correct sparkly nylon tutus.

But Balanchine had moved on a very long time ago.

After fleeing Eastern Europe, my mother, in the winter of 1957, experienced something even more shocking than anything she had ever lived through up until that evening: attending a ballet in New York where men and women danced “practically naked” [leotards and tights] “where you could not avoid being forced to look at their –what is the polite word? ah, yes — crouches” [a LOT of splits in all kinds of horizontal and vertical and 3-D directions].

More disconcerting to her: the ballet fit into no preconceived category. “Almost naked, yes, yet nothing to do with strip tease,” she would always ponder. “The dancers were so grim and serious, as if they were in combat.” She never quite got over the shock, but also never quite forgot how that evening made her begin to understand what freedom could feel like: living full-out, uninhibited, unashamed, playing around with force and speed.

My disarmed and diffident mother was not so far off the mark, for Lincoln Kirstein – Balanchine’s amanuensis – speaks of this ballet in these terms: “the innovation lay in its naked strength, bare authority, and self-discipline in constructs of stressed extrreme movement […] it was an existential metaphor for tension and anxiety.” [Balanchine’s Complete Stories of the Great Ballets].

The ballet, perhaps I should say THE ballet, is Agon.

No frills, no flowers,no moonlight serenades, no distractions. “Agon” literally means: struggle, competition, suffering. Olympics, marathons, each morning’s ballet class, or actually really doing those sit-ups you intended to do after crawling out of bed. That everyday fight between you and the mirror.

Stravinsky’s spiky score plays on and distorts – the way only someone who composed The Rite of Spring could – early Baroque dance forms. Not that it matters. Unless you are a musicologist, I dare you to recognize the 17th century rhythmic references to those rigidly codified dances which the court of Louis XIV transformed into the very first ballets ever performed.

“A choreographer cannot invent rhythms, he can only reflect them in movement.” [BCSGB] quoth Balanchine. But there is more to this piece than that. During an interview on television Balanchine once addressed what could be the potentially boring part of any plotless ballet: “What is abstract? Boy meets girl. This is not abstract.”

Something about this ballet speaks to the attraction of equals. Men and women meet and interact as only trained dancers can do: at the highest pitch. Tell me you’ve never ever felt the tiniest urge to outdo your partner on the dance floor.

Spinoza – please indulge me in an exceptional moment of philosophical pretension – spoke about how true freedom could only be achieved by completely conquering our passions. Dance provides just such a way: by controlling their bodies, dancers free themselves from time and gravity. They simply embody passion abstracted, calmed, teased and tamed. Watching them do the impossible, we join them in tasting what it feels like to be completely free. 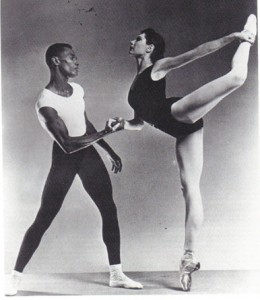 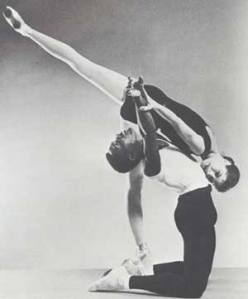