Robbins in Paris. Elegance : innate, mysterious, and sometimes out of place 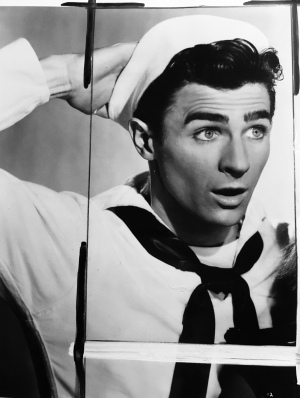 Would the “too elegant dancers of Paris” – as American critics decry them – be able to “get down” and frolic their way through the so ‘merican Fancy Free? Would they know how to chew gum like da guys and play like wise-asses? Just who should be blamed for the cost of leasing this genre ballet from the Robbins Trust? If Robbins, who had delighted in staging so many of his ballets on the Paris company, had left this one to other companies for all these years…did he have a good reason?

On November 6th, the dancing, the acting, was not even “too elegant.” Everyone danced small. The ensemble’s focus was so low key that the ballet became lugubrious, weightless, charmless, an accumulation of pre-fab schtick. I have never paid more attention to what the steps are called, never spent the span of Fancy Free analyzing the phrases (oh yeah, this one ends with more double tours to the right) and groaning inwardly at all the “business.” First chewing gum scene? Invisible. Chomp the gum, guys! For the reprise, please don’t make it so ridiculously obvious that another three sticks were also hidden behind the lamppost by the stagehands. I have never said to myself: aha, let’s repeat “now we put our arms around each others’ shoulders and try hard to look like pals while not getting armpit sweat on each others’ costumes.” Never been so bored by unvaryingly slow double pirouettes and by the fake beers being so sloppily lifted that they clearly looked fake. The bar brawl? Lethargic and well nigh invisible (and I was in a place with good visibility).

Then the women. That scene where the girl with the red purse gets teased – an oddly wooden Alice Renavand — utterly lacked sass and became rather creepy and belligerent. As the dream girl in purple, Eleonora Abbagnato wafted a perfume of stiff poise. Ms. Purple proved inappropriately condescending and un-pliant: “I will now demonstrate the steps while wearing the costume of the second girl.“ She acted like a mildly amused tourist stuck in some random country. Karl Paquette had already been stranded by his male partners before he even tried to hit on this female: an over-interiorized Stéphane Bullion (who would nevertheless manage to hint at tiny little twinkles of humor in his tightly-wound rumba) and a François Alu emphatically devoted to defending his space. Face to face with the glacial Abbagnato, Paquette even gave up trying to make their duet sexy. This usually bright and alive dancing guy resigned himself to trying to salvage a limp turn around the floor by two very boring white people.

Then Aurelia Bellet sauntered in as the third girl –clearly amused that her wig was possessed by a character all on its own – and owned the joint. This girl would know how to snap her gum. I wanted the ballet to begin afresh.

A week later, on the 13th, the troops came ashore. Alessio Carbone (as the sailor who practically wants to split his pants in half), Paul Marque (really interesting as the dreamer: beautiful pliés anchored a legato unspooling of never predictable movement), and Alexandre Gasse (as a gleeful and carefree rumba guy) hit those buddy poses without leaving room for gusts of air to pass between them. Bounce and energy and humor came back into the streets of New York when they just tossed off those very tight Popeye flexes as little jokes, not poses, which is what they are supposed to be. The tap dancing riffs came off as natural, and you could practically hear them sayin’ “I wanna beer, I wanna girl.” Valentine Colasante radiated cool amusement and the infinite ways she reacted to every challenge in the “hand-off the big red purse” sequence established her alpha womanly dominance. Because of her subtle and reactive acting, there was not a creep in sight. Dorothée Gilbert, as the dame in purple, held on to the dreamy sweetness of the ballerina she’d already given in Robbins’s The Concert some years ago, and then took it forward. During the duet, she seemed to lead Marque, as acutely in tune with how to control a man’s reactions, as Colasante had just a few moments before. Sitting at the little table, watching the men peacock around, Gilbert’s body and face remained vivid and alive.

A SUITE OF DANCES

Sonia Wieder-Atherton concentrated deeply on her score and on her cello, emitting lovely sounds and offering a challenge to the dancing soloists. They were not going to get any of the kind of gimlet eye contact a Ma or a Rostropovich – or a rehearsal pianist – might have provided. On November 6th Matthias Heymann and on November 13th Hugo Marchand reacted to this absent but vibrating onstage presence in their own distinctive ways.

Heymann infused the falsely improvised aspect of the choreography with a sense of reminiscence. Sitting on the ground upstage and leaning back to look at her at the outset, you could feel he’d already just danced the thing one way. And we’d never see it. He’d dance it now differently, maybe in a more diffused manner. And, as he settled downstage at her feet once again at the end, you imagined how he would continue on and on, always the gentleman caller. Deeply rooted movement had spiraled out in an unending flow of elegant and deep inspiration, in spite of the musician who had ignored him. Strangely, this gave the audience the sense of being allowed to peek through a half-open studio door. We were witnessing a brilliant dancer whose body will never stop if music is around. Robbins should have called this piece “Isadora,” for it embodies all the principles the mother of modern dance called for: spontaneous and joyous movement engendered by opening up your ears and soul to how the music sings within you.

Heymann’s body is a pliant rectangle; Marchand’s a broad-shouldered triangle. Both types, I should point out, would fit perfectly into Leonardo’s outline of the Vitruvian Man. Where your center of gravity lies makes you move differently. The art is in learning how to use what nature has given you. If these two had been born in another time and place, I could see Merce Cunningham latching on to Heymann’s purity of motion and Paul Taylor eyeing the catch-me-if-you-dare quality of Marchand.

Marchand’s Suite proved as playful, as in and out and around the music while seeking how to fill this big empty stage as Heymann’s had, but with a bit more of the sense of a seagull wooing his reluctant cellist hen. Marchand seemed more intent upon wooing us as well, whereas Heymann had kept his eye riven on his private muse.

Both made me listen to Bach as if the music had just been composed for them, afresh.

AFTERNOON OF A FAUN

It’s a hot sweaty day in a New York studio. A guy is stretching out all those ligaments, waiting for the next rehearsal or class. A freshly showered girl passes by the classroom door and pushes herself through that half-open studio door. Both – and this is such a dancer thing – are obsessed with how they look in the mirror…for better, for worse? When you are a young dancer, boy do you read into that studio mirror: who am I? Maybe I can like what I see? How can I make myself look better?

On the 6th, there was Marchand and here came Amandine Albisson. Albisson almost hissed “look at my shiny, shiny, new pointe shoes!” This may sound weird to say, but that little Joseph Cornell box of a set seemed too small for two such vibrant personas and for the potential of such shiny shoes. Both dancers aimed their movements out of and beyond that box in a never-ending flow of movement that kept catching the waves of Debussy’s sea of sound. The way that Marchand communicated that he could smell her fragrance. The way that fantastically taut and pliant horizontal lift seemed to surf. The way Albisson crisped up her fingers and wiggled them up through his almost embrace as if her arms were sails ready to catch the wind. The way he looked at her – “what, you don’t just exist in the mirror?” – right before he kissed her. It was a dream.

Unfortunately, Léonore Baulac and Germain Louvet do not necessarily a couple make, and the pair delivered a most awkward interpretation on the night of the 13th, complete with wobbly feet and wobbly hands in the partnering and the lifts were mostly so-so sort-of. Baulac danced dry and sharp and overemphatic – almost kicking her extensions – and Louvet just didn’t happen. Rapture and the way that time can stop when you are simply dancing for yourself, not for an audience quite yet, just didn’t happen either. I hope they were both just having an off night?

I had the same cast both nights, and I am furious. Who the hell told people – especially the atomic couples – to grin like sailors during the first movement? Believe me, if you smiled on New York’s streets back in 1983, you were either an idiot or a tourist.

But what really fuels my anger: the utter waste of Florian Magnenet in the central duet, dancing magnificently, and pushing his body as if his arms were thrusting through the thick hot humidity of Manhattan summer air. He reached out from deep down in his solar plexus and branched out his arms towards his partner as if to rescue her from an onrushing subway train and…Sae Eun Park placed her hand airlessly in the proper position, as she has for years now. Would some American company please whisk her out of here? She’s cookie-cutter efficient, but I’ll be damned if I would call her elegant. Elegance comes from a deep place. It’s thoughtful and weighty and imparts a rich sense of history and identity. It’s not about just hitting the marks. Elegance comes from the inside out. It cannot be faked from the outside in.