Not at all: three casts have provided very different shades of that flower’s perfume.

PROLOGUE/CARABOSSE: Where sits our silky sullen dame,/Gathering her brows like gathering storm,/Nursing her wrath to keep it warm. [Robert Burns, “Tam o’Shanter”].

Every time I see the prologue, I can’t wait until the evilest fairy in balletdom bursts into view. Here each interpretation of Carabosse intrigued me.

On my first evening Nolwenn Daniel reminded me of the teacher who, when I met her again years later, seemed nothing like the witch who had so terrified me as a small child.  This made the role sadder: proper, strict, full of regret of having until now always played by the rules. Rather than channeling some inner diva, her sullen Carabosse seemed to beseech the court: “why do you hate me so much?”

Sabrina Mallem  banged her walking-stick loud enough to awaken even the grumpy Jean-Baptiste Lully. Anger arched through the nape of her neck.   Her Cruella must have been always driven to destroy the young and the beautiful.  When she set her minions upon the fairies, she seemed to be calling upon wolves to eat helpless puppies.  No melancholy here, pure gleaming wrath.

But, I must admit, Stéphanie Romberg gave me a witch the way I best like ‘em: haughty and full of fun inflections.  She played within the music, slowing down and accelerating her gestures at will, thus punctuating every morsel of mime.  She made “the words dripped with sarcasm” physically, silkily, palpable.

ACT I: AURORA DAWNS But to see her was to love her,/ Love but her, and love for ever. [Burns “Ae Fond Kiss”]

From the get-go, Ludmila Pagliero clearly had been dreaming of a Prince for a while now.  Perhaps Juliet’s nurse had already told her the facts of life, for she was ready, unafraid of her future as a wife. When her father presented her with the four Princes, and the way she responded to them, signaled “these guys are kind of cute! Ooh, but which one to choose?”  She attacked the Rose Adagio with flair and no fear of mistakes (she has the gift: when she “goes off,” she knows how to cover in a way most of the audience assumes are intended steps). This fearlessness translated into an unusual and refreshing take on the Second Act.  Indeed her entire interpretation worked back from Aurora’s exclamation when she is awakened: “I had a dream! Of a handsome prince! Who must be the man I love! And look! Here he is again!”  So Act Two turned into Aurora’s dream, not the Prince’s. She was checking out this umpteenth suitor and really liked what she saw.

Amandine Albisson’s more innocent Aurora seemed to exhale health and made me think she smelled of pure soap and fresh-mown grass. She incarnated the first breath of spring that knows not sorrow nor want nor winter nor desire.  She brought out the waltzing spaciousness of all the First Act music, and seemed to breathe her way through her balances and lush penchés.  The Second Act, all legato and lines, allowed her to suffuse the stage with an even more delicate and serene fragrance.  I prefer Albisson when she gets slowed down and can luxuriate in the moment and the movement.

My third cast, Myriam Ould-Braham, proved both the most experienced in the role (2004!) and the youngest at heart.  She’s managed to hold on to her fresh precision and natural expansiveness: she’s like Makarova, a tiny dancer for whom the stage always seems too small.  Her Aurora waves at her friends, adores her mother – the regal and warmly expressive Christine Peltzer — and probably not only still has a bedroom full of stuffed toys but probably live mice, hamsters, and a bunny rabbit.  She met her suitors in slight disbelief, like the young girl who suddenly feels a man’s arm about her waist at her first ball.

A small but telling detail. Each time – in many companies’ versions — I cringe when during the “Rose Adagio” Aurora, after handing her first set of roses to her mother, dumps the second clump somewhere downstage left kind of near someone’s feet. What kind of well-bred girl throws away gifts in the presence of the men who offer them?  Finally, Ould-Braham’s didn’t.  She handed them gently to mom again, but with less energy, as if she had begun to understand that her situation was serious, that this second time she got what the flowers meant but couldn’t quite pick one man quite yet.  Of course, then, this Aurora blossomed during her slow variation: she was thinking about what had just happened to her. And the way she responded to the sweet music gave us time to enjoy Ould-Braham’s natural finesse, delicate lines.

Another detail: the way each “died.”  Pagliero, utterly shocked and disbelieving, attempting to keep up the facade.  Albisson reacting as if the needle had been poisoned and striving desperately in big gulps to seek help (I look forward to a Giselle one day). Ould-Braham , whose tiny rushing steps expressed how deeply she couldn’t understand why anyone could want to hurt her. Each actress made this moment her own and I wouldn’t want to choose between them.

ACT TWO: Princes and lords are but the breath of kings, /’An honest man’s the noblest work of God” [Burns, “The Cotter’s Saturday Night”]

There’s the rub.  Princes. A bore. Not much to do except be handsome and noble and elegant and do the usual barrel turns…but is that true?  Nureyev’s version adds a bloody exhausting 8-minute solo for Desiré, where our prince keeps shifting intention, feet, direction, and energy, to one of Tchaikovsky’s most heartbreaking violin solos (originally written as an interlude, not meant to be danceable).  All tension and yearning, full of abrupt hesitations – this is where a dancer could establish a Wagnerian Siegfried-like character, bereft, in desperate need of a reason to live.  The choreography establishes that this prince…thinks. When a dancer commits to this solo, you understand why this generic prince could in fact be just the man worth waiting a hundred years for.

Pagliero’s suitor, Josua Hoffalt,  rushed through the solo with more impatience than melancholy.  Nominated  étoile a bit early, he still often seems too raw, and didn’t really seem to get the point of this pièce de résistance.  It’s up to you to bring a character alive, even if you think princes are all dimwits.  This lack of commitment translated into his dancing.  In particular, his forward energy kept getting blocked in his manèges: during one sequence in Act Three, his chainé turns into grand jetés seemed to stay rooted in place. He was no match for Pagliero’s splendid energy and aplomb.

Albisson and Florian Magnenet are matched because they are both tall, I guess, but they don’t fit together. Not only did they seem too polite and distant during the Wedding, from the first their lines and attack just didn’t align. Whereas Albisson uses her body full out all the time, Magnenet seems to fade in and out. His sleepy feet and loosely-controlled landings surprised me.  He’s handsome and well-built and he gave more energy and phrasing to the searching aspect of his big solo than Hoffalt, at least, but he really needs a coach to clean up the details. Talent does not suffice. In the ballet’s finale, the prince’s sisonnes should be at least as pretty and assured as that of Silver (Cyril Mitilan) and the Bluebird (Marc Moreau).

But, ah, Mathias Heymann.  Of the three, only he didn’t get a round of applause upon his entrance: he’s enough of a prince not to have to play the prince.  Then time stopped during his solo. He brought the line, the tension, the perfect soft landings, and clearly-delineated sweet agony inherent to the counter-intuitive changes of direction, that are there for the taking.

One of my favorite moments where Nureyev fits the action to the word occurs near the end of the dream scene. The corps de ballet, in interlaced groups of four, fold back into a long line that slices across the stage in a diagonal as the music gets more and more nervous. Suddenly, Desiré bursts into view and launches into a series of brisés/sauts de chat that fly across the ground, followed a split-second later by Aurora in travelling coupé-jetés.  What these steps should mean: our hero is promising to lead our heroine out of her limbo and she will follow him to the ends of the earth.  What it can look like: Aurora chases after her prey.  Manuel Legris knew how to make this moment count, and now with Heymann I felt a happy shiver go down my spine, as I delighted in Ould-Braham’s effervescence as she effortlessly followed his bravura lead.

ACT THREE: Go fetch to me a pint o’ wine,/An’ fill it in a silver tassle.

Despite having been promoted première danseuse, Valentine Colosante  — technically by-the-book, perfectly-proportioned yet too deliberate, a quality Anglos criticize the company for – never delighted my eye until this Florine.  Perhaps she needs a partner and François Alu’s high-flying yet earthy Bluebird finally brought out a kind of sweet personality in her dance. They both gave the audience a gloriously danced interlude.  Again, though, I wouldn’t give up having seen Charline Giezendanner (still only a soloist?!) shimmer next to Marc Moreau, or Eve Grinsztajn with Axel Ibot.  Grinsztajn, too often cast in the “sexy” roles (Manon in “La Dame aux Camelias” or the Street Dancer in “Don Q,”) reminded me of her lovely proportions, purity of line, and of the power of her unadorned classical technique.

THE CORPS DE BALLET: Green grow the rashes O;/The sweetest hours that e’er I spend/Are spent among the lasses O! 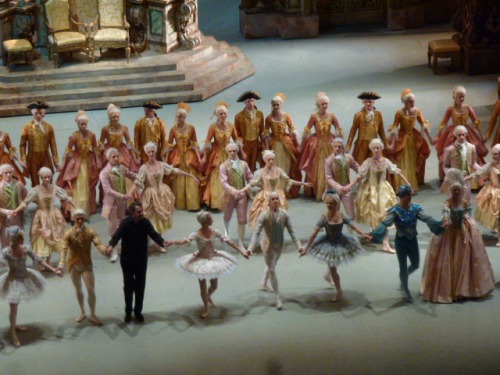 The cast bows on December 25

And I tip my hat to Julianne Mathis, ever stuck in the corps but always buoyant and fine-tuned, who somehow still radiates joy in dancing.  I’ve always enjoyed following one dancer of the corps in his or her patterns – feels kind of like cheering on a football player – and Mathis seems to have been promoted into the incredibly vital yet thankless role of locomotive for the corps, a position Nathalie Aubin used to play to both my delight and sadness.  The corps de ballet makes enchanted kingdoms come to life.  Princes and princesses can’t live without them. Then gently scan your brother man, /Still gentler sister woman…