Romeo and Juliet, Diop and Baulac : “Who straight on kisses dream.” 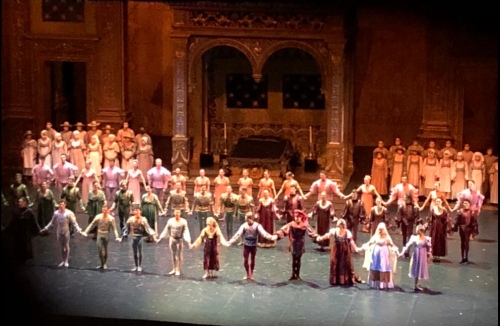 In the unexpected debut of Guillaume Diop — a youngster still only in the corps de ballet – he, along with his Léonore Beaulac, opted for a less-often used interpretation of the “star-cross’d lovers.” The sweet and tender thrum of their connection re-centered this ballet around youthful innocence rather than around the obsessive force of sexual desire. Shakespeare’s text leaves room for just how young these youngsters might be, even if he specifies that Juliet is a ripe thirteen…

“Love goes toward love, as schoolboys from their books.”

Guillaume Diop’s way of dancing reminds me of the Hugo Marchand of maybe five years ago. Like Marchand back then, Diop has style already and everything else ready to go. Unaffectedly expansive épaulement giving you the impression that his arms actually start down there at the belly-button. Long legs performing effortless and unpretentious, but huge, leaps that end in silent and soft landings only to then extend out into high arabesques without any ostentation or exaggeration.  But, like Marchard back then, Diop just needs to concentrate a little bit more on enriching the control of his feet. Not that his are limp, not at all, he can certainly point them but…if he could just send a bit more energy down there and out from there, play more with the relevé, he could give them the same force as those of his unostentatiously powerful hands. And yes he will need to continue to burnish and polish those little details that only come from practice (holding on to turn-out when coming out of a phrase).

At the tender age of twenty (when men’s bodies only become fully mature and resilient around age twenty-three), Diop proved that he is already a reliable and attentive partner: reactive, confident and not stiff. With a few more years of experience in the spotlight, it is clear that he will make his partnering really swing.

But what matters more than these details is that Diop already holds the stage. He demonstrated that technique is meant to be a means, not an end in itself.

So now let us revisit the dramatic events.

“O! That I were a glove on that hand/That I might touch that cheek.

When Léonore Baulac’s Juliet pulled the curtain back on the Nurse having sex, her reaction was not about awakened senses but definitely about “eew that’s icky, I don’t want it.”

In the “morning after the wedding night” scene, here it was not about “I am physically-sated and I want more of this action until the end of days.” Instead, the rapport between R&J made you imagine that during all those hours in the dark, what they had been getting up to was exactly what you had once done: stayed up all night whispering more intently than you’d had ever even talked to anyone before, clinging to each other, whispering so as not to wake up the parents. While certainly a bit of exploring boobies and more kissing were probably involved, you sensed their innocence remained intact. My mind drifted back to a childish pact that was once sacred: make a tiny cut, smear pinkies together = blood brothers for life. The French have a great expression for this. You have discovered your “âme soeur,” your soul-mate.

As Rosalind, a role where you don’t move very much and that has come to constitute an artistic ghetto unto itself for talented ballerinas (Isabelle Ciaravola was stuck in it for years), Hannah O’Neill gave this avatar a pleasing and cheery “oh well why the hell not” elegance.

Lady Capulet and Tybalt had clearly connived to protect Juliet from this mean and ugly world from the day she was born, but you saw nothing Oedipal in their interactions. Emilie Cozette’s pensive and emotionally-exhausted Lady Capulet made me wonder whether she too had once been a headstrong Giulietta with all the joy since worn out of her. Her impulsive slap at Juliet’s refusal to marry Paris, as well as her shocked reaction to her own gesture, illustrated that of a loving mother undone by her so-far-so-perfect child’s first public tantrum. Indeed, the most rough-handed and grouchy person in the room kept turning out to be Yannick Bittancourt’s heavy-spirited Paris.

Florian Magnenet’s Tybalt was in no way sadistic nor mean either. You could just imagine him as a strict but benevolent pater-familias of six clingy kids six years hence.  He, too, cared more about protecting his little cousin than about the whole big fat fuss between the Capulets and Montagues. You could sense that the whole “us vs. them” had bloomed out of provincial boredom [Verona, even today, is a very, very, small town] and that everyone involved in the feud took it only half-seriously.

In the same interpretive vein, Pablo Legassa’s shimmering and sharp-legged Mercutio was “the guy no one can really get mad at.” [Legassa is so ready to play real leading roles, his body and soul are in that “sweet spot.”] And Marc Moreau’s  “I get the joke, guys” Benvolio gave real bounce to the repartee of the boys. As Benvolio, “the nice guy,” too many dancers get too serious and fade into the background while mentally preparing to catch “the big guy’s” grand anguished backward leaps in Act III.  While the back-flips were smoothly-managed rather than frightening, this fit the rapport that had been established between this sweet-dreaming Romeo and this “I have so got your back” Benvolio.

So the duel between Tybalt and Mercutio took on a specific vibe, more school-yard fight between two people saying “don’t be such an ass-hat” than the predictable fight to the death, which made their deaths all the sadder.

“O! She doth teach the torches to burn bright!”

Léonore Baulac’s  Juliet  floated on this bubble of love and friendship and good humor. She was that well-brought-up girl whose biggest personal challenge so far had been always winning the dare of “who will jump off the swing at its highest and land the furthest out!”

From the ballroom scene to the balcony scene to the bedroom scene each step of the interplay between these two reminded me of the infinite possibilities that Breughel the Elder’ proffers in  his “Children’s Games” {Kunsthistorisches Museum, Vienna}. It’s there in the choreography, but usually highlighting “patty-cake” suffices for most dancers. Here, while watching the dancers I started to make an inventory of references and to float back to those happiest days of childhood. Oh, hop-scotch, marbles, summersaults….just like when we were all just kids.

As the gentleness of a Tony from West Side Story infused Diop’s Romeo– absolutely a dreamy kid rather than a teenager with raging hormones — his connection to Baulac [she can become so responsive to what her partner is all about] replaced the expected over-heated sensual excitement with something often more true in real life: that lower-key mutual vibe that is the secret for lasting marriages. Your adored partner is in fact your best friend. This does not mean these young people were devoid of strong emotions, quite the opposite.

“When he shall die,/Take him and cut him out in little stars,/And he will make the face of heaven so fine.”

Cute detail: just before kissing Juliet for the first time, Diop’s mouth went wow into an adorable “O” as he inhaled. It was really like that boy aiming his face at you for his first kiss ever, not quite certain where it would land. So sweet.

An oft-cited quote from Nureyev speaks of a boy evolving into a man because of a young woman who “decides everything. She is passionate, head-strong, and more mature than he is.” Here with Guillaume Diop and Léonore Baulac, it was the opposite: a young man and a young woman who are equals in naïvité, equally astonished by a fate they had not anticipated. Neither really wanted to die, but just felt too ashamed to go and talk to their parents and ask for help.

The next day, I began describing what I saw to James. “Ah,” he said, “At the end, then, you wanted them to live so much you were ready to send them a link to a suicide hotline?” Yes, indeed. All of these kids – from Romeo to Juliet to Tybalt to Mercutio to Paris down to the Friar’s messenger – so totally didn’t deserve to, or want to, or need to, die. 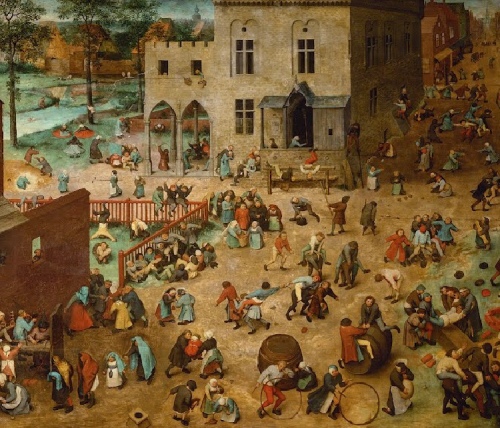 2 réponses à “Romeo and Juliet, Diop and Baulac : “Who straight on kisses dream.””