“Far above the world, Planet Earth is blue”

You sense Dorothée Gilbert’s Nikiya never chose to become a Temple Dancer but that, on one day when she was about five, society had already determined her fate. Attuned to a routine that could only be less dull if fully inhabited physically, her mind had long wandered off into a place so quiet and still it was almost dead.

How did she make me feel this? Restraint. In slow rhythms she let loose supply sculpted arms, infinitely extended, yet never letting her back arch to gymnastic extremes. She used a kind of slowness that tasted the music and married it to a refusal of showing off technique for technique’s sake. Except for the balances. A péché mignon she adorably never has been able resist re-testing on stage (hey, I grew up holding my breath watching Cynthia Gregory, so I’m cool with that). Here – excepting one moment when she let the balance thing really go on much longer than drama required – her long moments suspended on one foot added to this idea of a lost soul seeking a quiet and still point.

Then the way turned on and off the power of her deceptively doe-like deep brown eyes — which penetrates even up to a seat way up in space — added to all that the choreography offered: just how do you fully express the strength of the weak?

“And I think my spaceship knows which way to go” 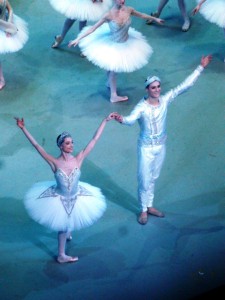 Everything about this character Gilbert wove – to the way that Hugo Marchand’s arms and lines could not help but follow hers, as if they shared an internal compass – made me regret, once again, that this silly woman refused to dance Odette/Odile last season. I don’t want a predictable Zacharova-type clone every time, I want a real person – precisely with their weaknesses as well as their strengths – to inhabit each role in their own way. I mean, you didn’t arrive at the Met for standing line at 5 a.m. with the expectation that Fonteyn would do six o’clocks. And Gilbert has always had something Fonteyn-y about her, not only her alert gaze, but her dance. It’s become even more soft and buttery and expressive and…hers.

Hugo Marchand took to the stage as Solor with great big floating jétés and severe pantomimic authority and never let go. Hugo Vigliotti’s Fakir bounced back against this human wall of power and threaded wiry malice into all of his dances, including that FireEater can-can in Act Two, where his pagan bounces inflamed a very connected Roxane Stojanov and Yann Chailloux.

Fabien Révillion fought back against the glamorous non-role of “The Golden Idol.” I mean, David Bowie’s ”for here I am sitting in a tin can” describes perfectly just how you warm up for ages during Act 1. Then do “the thing” in the middle of Act Two during about three minutes after warming up again. Then sit around for the entirety of Act Three somewhere, maybe the canteen, just itching to wash off Goldfinger body paint… How do you act one tiny cue of a whirl of your wrists as if you were Mr. Kamasutra while surrounded by happy kids from the Paris Opera school striking poses left and right at an annoying pace? Révillion is a person who acts who happens to be blessed with that kind of ballet technique that looks seamless and easy. Which may be stereotyping him. His “La Fille Mal Gardée” this summer proved he marries body and soul if given real parts. He’s not a gymnast. Don’t let him get stuck in these kinds of roles.

Marion Barbeau’s Gamzatti proved delicious, even if Marchand’s physique makes her look too tiny (and she’s not and doesn’t dance small either). She had uptown girl authority in her pantomime (what a badass strut set off the “confrontation scene”!) which carried over and then infused drama into her feisty approach to each balletic step.

Hopefully this talented soloist will not linger long in promotion limbo, as seems to be happening to Héloïse Bourdon. Such women nail principal roles with authority one night. Then they get stuffed back into the line of 32 bayadères yet again, and again. I watched Bourdon, back amongst the Shades, whose line drew my eyes despite her Nikiya-like attempt to be a good girl and toe the line, as Barbeau will once again do tomorrow or after tomorrow. I worry about the limits of exhaustion during this endless series of performances.

“This is Ground Control to Major Tom”

As for the nameless last act soloist variations, of utterly shameless dramatic unimportance — pure pleasant eyewash for the beholder and pure technical hell for the dancer – they should still be imagined as roles. Even if baldly lit, you just gotta think you are some kind of fairy or something, singing celestial backup to the beyond-the-grave duet of the heroes, no? Do not, as the normally intriguing and elegant Hannah O’Neill decided, pump your variation as if this was still about Grand Pas Classique in front of yet another jury. Maybe deliver something full-out yet modest and mild, like Valentine Colasante. Do, as Aubane Philbert did, chisel soft echoes of Princess Florine and offer your vision of the meaning of these little steps gently to what you imagine to be — and this night was — an audience glad for any excuse to postpone returning to earth.