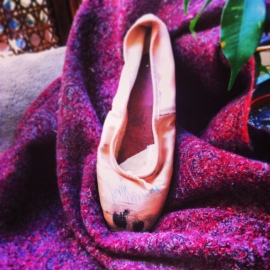 Among the weird objects I will admit I own and cherish: one of Marcia Haydée’s ravaged pointe shoes.  Standard Freed’s, ballet size 4 ½, lined hastily with something akin to ripped Kleenex. Broken and dirty and small, it still reminds me of how each time I saw her on stage all of her came together, how she grew beyond her limits and used the body beyond that shoe to tell me a story.

Whether by calculation or instinct – but certainly to the delight of the choreographer — the creator of Cranko’s Tatiana always drew the audience into her orbit.  In any role, Haydée could seem almost demonic: fearless – especially when hurling herself heavily at partners – greedily absorbing and consuming emotions and then expulsing them out of every corner of an unconventional body. Everything she did emanated from a radiant core and this dancer never feared looking ugly or going too far if it served the narrative. Even if  you imagined her partners screaming “ice pack” as soon as they hit the wings, you rooted for her from the top of Family Circle at the Met because she somehow possessed a Callas-like shimmer that made all of us up there feel as if we were sitting only three feet away.

Haydée had a controversial dance equivalent of “vibrato.” Haydée could be scary. I am devastated that whoever owns the rights to the few recordings of her performances make most of them utterly inaccessible. (And equally enraged by all the other “Dead Choreographer Trust Babies” who systematically force erasures on UTube. The choreography keeps getting sold to companies, but why should that require washing away the footprints of prior and current generations of performers?)

Please believe me, I do not live in the world of “I was there, you were not.” Indeed, what keeps me going to the ballet is the hope of discovering new performers I can root for and new performances that will keep these old masterpieces alive and memorable.

But alas, on February 10th in Paris, I could only root for Eve Grinsztajn’s Olga. She alone seemed to have read the poem and listened to the opera. Lacking access to old video recordings I rely on my fading memories of Susanne Hanke: lustrous and poised, possessed of beautiful feet in the days before beautiful feet became standard issue, politely fighting back but gently amused by her wilder older sister.  Grinsztajn alone of this cast radiated a thirst for life, a desire to fill the air with her limbs and pearly feet and take at least a few emotional risks. This energy sadly seemed to have been drained from the other leads before the performance even began.  If it has taken me too long to write to you, it is because I came home dulled and enraged and loath to hurt the feelings of these dancers and their fans alike.

Ludmila Pagilero should have read more of what Pushkin says Tatiana read: Richardson with his sturdy damsels in distress, his villains more appealing than his heroes, his warm irony, but also his tacky exuberance.  His characters eat, they are sensual!  Pagliero’s performance broke my heart for all the wrong reasons.  For, when I finally broke down and used my binoculars from the last row atop the Palais Garnier during curtain calls, I could see that her face was filled with spent emotion.  Her face, yes, but her body had never once ripped loose. Instead her instrument had been precisely calibrated, each time doing Cranko’s triple repeats of steps exactly the same careful and studious way.  Thus nothing was ugly, but not ripe or rawly beautiful or expressively expansive either. Everything she did seemed small. We want our heroines to be…big.

I’ve found that Pagliero needs time to grow into a role onstage and fill it out.  She lets go of the classroom by the 4th time, usually. (This was her 2nd)  Unfortunately, I will not get to see her again. She’s out. Injured.  Indeed I delayed writing in anticipation of seeing her on the 25th, expecting an “aha” moment. Was she already fighting against pain on the 10th? Certainly that could entirely explain away an overly cautious attack, a reluctance to get her feet bruised by Cranko’s dangerous partnering landscape.  Thus I do I look forward to the next time she gets a chance to take a chance on Tatiana.

But perhaps Pagliero’s wan Tatiana could be also be ascribed to a major lack of chemistry with Karl Paquette’s Onegin?  He should have read more Byron… While the ballet makes the “hero” less likeable, when you read Pushkin’s original, you get how multi-layered and complicated the guy can be.  Onegin’s only real problem – even if well-read — is that he doesn’t listen to (or realize that he has) a heart when there is still time. Paquette – like Haydée, or any of Byron’s poems – can be a marvelous vector of emotion and most pleasing to spend time with, but only when he is at ease (as in this fall’s “La Dame aux camélias”).  Here he, like Pagliero, seemed too stiff from the get-go, uncomfortable in Onegin’s alien skin. Instead of getting into the story, I sat there wondering during each of this couple’s encounters “what if.”  What would Haydée’s crazy shoes have forced out of Paquette, or an encounter with the toss-around madness of Richard Cragun (or the suave and creepy confidence of Heinz Clauss) have released out of Pagliero?

If Egon Madsen – the Antony Dowell, all pure lines and tender tension, of Stuttgart back then – could have been in the audience this night, he would have picked Florian Magnenet up by the ear and hauled his sloppy Lensky back into the rehearsal room.  I am not sure which of the rehearsal directors imported from Germany actually worked with Magnenet, but I blame them all for allowing such a half-baked effort to be presented on stage to the dancer’s disadvantage.  Let’s get over the fact that he is relatively good-looking and tries to turn that fact “into “acting, Magnenet has lost his bearings. He doesn’t even know how to land from a jump or launch into an arabesque anymore without wobbling all over the place.  After his solo I wanted Onegin to shoot him.  Blessed with beautifully arched feet, apparently, even that fact has become invisible lately.  Why doesn’t he use them, and the rest of himself, to pull himself up and out of approximate performances?  He needs to shake himself up as both artist and dancer before it’s too late.

After an evening so utterly lacking in poetry, I could only think of Edward Lear’s “serve up in a clean dish, and throw the whole out of the window as fast as possible.”  These dancers should dare to get dirt on their shoes. And when they will, the story will come alive again and we will have the excuse we need to whip out the crinkled Kleenex in order to joyfully smear tear-ridden mascara all over our faces.  Ah yes, that’s it, advice from the uxorious Robert Browning: “No, when the fight begins within himself, /A man’s worth something.” [Bishop Blougram’s Apology].