As Diaghilev may have said: “ASTONISH ME!” 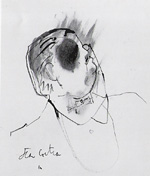 A triple-bill : “Béjart / Nijinski / Robbins / Cherkaoui-Jalet” and the others (Igor, Claude, Maurice) begins May 2nd at the Palais Garnier in Paris.

Probably the most famous words spoken in dance (and probably the most apocryphal – mà, si no è vero è molto ben trovato), the impresario Serge Diaghilev’s roar quoted above can also be interpreted as “I want the best of everything.”  In 1908, this Russian aesthete began flooding Paris and beyond with the best musicians, the best dancers, the best designers, all obsessed by ceaselessly exploring the now and the new.  Until his death in 1929, Diaghilev’s Ballets Russes company continued this obstinate pursuit of the cutting edge: rich evenings of one-act ballets harnessing season after season the best talents of his time (some of them in embryo, as in a neophyte Coco Chanel for costumes):  Balanchine, Nijinsky and his sister Nijinska, Massine, Lifar/ Picasso, Braque, Matisse, Goncharova/ Stravinsky, Prokofiev, Debussy, Ravel…

Here the Paris Opera Ballet pays tribute in a manner Diaghilev might have endorsed: one revival, two re-mixes, and something so utterly new that the current management hopes it will make you jump out of your seat.

The original choreography for this ballet as set by Michel Fokine in 1910 continues to be produced in companies around the world.  Inspired by Russian fairytales, the classic version tells a linear story:  a rather dim prince encounters a big red bird wearing a tutu and toe shoes.  To the prince’s astonishment this one, unlike most ballet heroines, is not hanging around waiting to be loved or rescued, she wants to be rid of him.  She buys her freedom with a feather that will bring her back if called, promising to help him if need be.  And he will need it, once he encounters an evil sorcerer who seems to patronize the same beauty parlor as Edward Scissorhands.  In the end, the prince will end up freeing a passel of knights who had been uncomfortably turned into stone and a multitude of enchanted princesses for them to marry.

Maurice Béjart kept the redness of the “firebird’s” costume, but little else of the story when he remade it.  Or did he?  For the essence of the story remains the same:  we yearn for freedom, for liberation, at any price.

Here the bird –the free spirit, the catalyst — is danced by a man. For Béjart, totally ‘60’s in his instincts, a “firebird” could only mean a “phoenix:” a creature willing to be consumed and destroyed if that brings us a greater good.  Unlike the bird of 1910, this one will try to fire up the masses, rather than simply shake up a spoiled and naive princeling.

Honestly, I find the 1910 version, rooted in ancient Russian myth, eternally satisfying in the way it responds to and is rooted in the music. This 1970’s “partisan” version – inspired by emotions burning deeply right then due to the Vietnam War – can seem somewhat dated.  On the other hand, while it remains rather easy to locate women sporting tutus and feathers, being able to gape at a buff guy dancing his head off in tight vintage red spandex remains a relatively rare, and a most pleasant, experience.

Ode to a Grecian Urn goes somewhat 3-D.  Dance stiff and stylized in profile with bent knees and legs in parallel (as unnatural and uncomfortable for ballet dancers as skiing).

In this re-creation of the original choreography, a half-man/half-animal meets some females with anacreontic hair.  Not quite sure what to do with his feelings and the signals these women seem to send, the Faun ends up frightening them away. Like men in most bars today, he just doesn’t get it.

Left alone to figure out just what to do with the scarf one of the nymphs dropped when she fled, the Faun’s final gesture will still, 101 years later, astonish – even offend — some in the audience.

The same music again, but completely different…or maybe not. Consider how a ballet dancer his/her self could seem to be the most exotic and mysterious figure out there for many of us flat-footed ones.  They are fauns, fauna.  Outside the studio, they glide yet walk like ducks, hold their heads as if they had antlers balanced atop, take dragonfly leaps over puddles in a delicate manner frogs would envy, do weird catlike stretches in airplanes…but inside the studio, freed from our gaze, they become human again.

Jerome Robbins (choreographer of Gypsy, West Side Story, Dances at a Gathering) created a ménage-a-trois to the same score as Nijnsky:  only here the almost lovers turn out to be 1) a boy 2) a girl 3) the studio mirror.  We, the audience, get to play the “mirror.”   If the 1910 version made you gasp, think about how here you get seduced into becoming peeping toms.

Invented in 18th century Spain, the “bolero” is a slow dance where two simple melodies are repeated again and again over a stuttering triple rhythm (one, a-a-a, and three, and one…). The Franco-Basque composer Maurice Ravel’s version differs from its model in that it builds to a cathartic orchestral crescendo.  Think Andalucia meets Phillip Glass.

In a medium difficult to write down and for long rarely deemed worth filming, Bronislava Nijinska’s original choreography – for the pickup company of a former Diaghilev diva who dared to set up a rival company, Ida Rubinstein — died with those who had experienced its few performances in 1928. Apparently her creation didn’t astonish the audience enough.

In Maurice Béjart’s 1961 version – the one most performed since — he appropriated part of Nijinska’s original story: a man/woman dancing alone on a table in a tavern.  But Béjart added how he/she slowly arouses his/her spectators on-stage and out-front to a rather melodic orgasm. His version remains enormously popular, if always rather embarrassing to witness.

As the première of a new conceptualization of this same music will take place May 2nd, I cannot tell you more than the pedigrees of the three commissioned to astonish us:

Cherkaoui/Jalet, both born in 1976, have collaborated for years on performance pieces, all over the world.  Cherkaoui started dance late – but is a very hip grasshopper — Jalet started his drama and ethnographic music studies earlier.  Both grew into and from the wild Belgian modern dance scene, which continues to sprout all over. Both men love exploring the limits of music and dance and stagecraft: from Björk to flamenco, from Florence and the Machine to Shaolin monks, from the potential physically and mentally disabled performers can bring to life to the banality of our everyday gestures.  These two share a quest to explore and explode categories of identity.

Adjoining them to the Grande Dame of Terrifying Performance Art – Marina Abramovic – makes me a bit nervous. Dare I say she explores and explodes too much in protest against our flat lives? Even if her most recent piece, which played at the MOMA in New York, seemed mild (only sharing a moment of silence per person during 736 hours with hordes who lined up for the emotionally exhausting experience), she has built a reputation since the 1970’s as someone inspired by quite extreme quests: almost burning to death, passing out from lack of oxygen, taking pills in order to have seizures or catatonia in front of an audience, letting it bleed…

Because they have pushed their bodies to the limit since childhood, self-induced pain brings nothing exciting and new to dancers. All that I hope is that this creative trio agrees that their cast has already been tortured enough. On the other hand, since I couldn’t attend the last time a ballet provoked a riot by furious spectators – the Diaghilev-provoked Rite of Spring one hundred years ago – I’d be tickled to actually be present at one…

Commentaires fermés sur As Diaghilev may have said: “ASTONISH ME!”