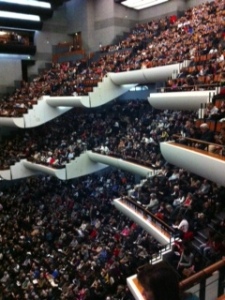 “I will make you brooches and toys for your delight / Of bird-song at morning and star-shine at night.” R.L. Stevenson, Songs of Travel, The Vagabond.

After missing the solar eclipse on a misty wind-swept Friday morning in Normandy, then hypnotized the next day at noon on a sloshed boardwalk by an epic high tide pulled out by the moon, I chugged back to Paris. Here I witnessed, at the end of a balmy Monday evening, that the Paris Opera’s astronomers had identified a new star.

Laura Hecquet has been promoted to étoile. I only regret that Stéphane Lissner’s and Benjamin Millepied’s telescopes failed to register the planet that pulled her into orbit: Hecquet’s partner, Audric Bezard.

Laura Hecquet has every quality that American critics – whose names shall remain unmentioned — would dismiss as “too French.” Therefore, I approve. Impeccably clean technique, strength, and subtlety. No show-biz, no razzamatazz, no six o’clocks unless the original choreography specifically calls for it. She’s demure – bashful, even — and precise, and intelligent [every single comment Cléopold noted Elisabeth Maurin making while coaching another dancer magically found itself integrated into this performance]. A tall one, she makes herself appear weightless, diaphanous, other-worldly. Maybe a bit too diffident? But I think that with time, now that she has been released from ballet purgatory she will loosen up just a little bit. For years, under the previous director — whose name shall remain unmentioned — Hecquet seemed to be stuck in the position of “also-ran,” and that can do weird things to your head and to your body.

So I didn’t expect her Odette/Odile to suddenly light up like a firecracker. There is room in the history of the stage for votive candles as well as for forest fires. Hecquet burns slowly and quietly. But then after the fouéttés, she suddenly relaxed, and those swift little hops during low arabesque dévélopé plus the next hops backwards into relevé became deliciously upscale strip-tease. She will never be – and I hope she will never try to be – a Ferri or a Loudières. But she could soon seduce the kinds of people who loved Cynthia Gregory or Cynthia Harvey. Most of all, I hope she will now feel free to become an Hecquet.

One thing I’ve always appreciated about Laura Hecquet is that she lets her partner shine. Too shy to hog the spotlight, she highlights how good it feels to be in good hands.

“Nullum quod tetigit non ornavit” [“Nothing he touched he did not adorn.”] Samuel Johnson, epitaph for Oliver Goldsmith.

Audric Bezard has “it.” My only memory, even just one day after being bored to tears by the recent Neumeier opus “Le Chant de la terre,” proves a slight but significant one. The young people nestle onto an Astroturf wedge while someone yet again dances downstage to each note. And up there was Bezard. Nestling, noodling, seemingly improvising, living this day as if the sun were actually shining. He encapsulated the song of life that Mahler was talking about while lying around on a piece of plastic.

As Siegfried, Bezard’s natural magnetism combined itself with a most intelligent reading of Nureyev’s text. His Siegfried doesn’t have complexes, he’d just never really thought about anything before. He seems as at ease with being a prince as a prince is imagined to be. He likes his cohort of friends – boys and girls alike in an unselfconscious way — and when his mother brings him the crossbow and the order to marry, he focuses first on the crossbow and then slowly, slowly, starts to process the second part of his birthday offering. So he’s not a melancholy prince nor a desperate one at all from the start: this one’s just never ever felt anything deeply.

Bezard does lovely stuff in all of his variations: always driving to the end of a phrase and then pulling it into the next. He also does something American critics would also dismiss as “too French.” Every single variation, every single bravura moment, ended in the softest landing with understated poise. Three big and easeful doubles à la seconde (who needs quadruples if doubles are well-done?) get presented as if they were no big deal. At the conclusion of his big solo near the end of the first act, the one intended to signal the beginning of his unease, he eased into another perfect landing. I mean perfect: soft as feathers. No applause for what seemed like ages, because none of us could get our breath back, rapt but suddenly uneasy too. The atmosphere Bezard created made it rather obscene – despite our appreciation of his surmounting the Nureyevian technical hurdles – to intrude upon his privacy.

This Siegfried wasn’t desperate –wasn’t passionately looking for true love either — as soon as the curtain went up. I would say the solution to the puzzle emerged during the pantomime that took place when Odette and Siegfried met: “I am queen of the swans” to “ah my lady, I am a prince too, I bow down to you as is proper to our station.” I’m not sure that I’ve ever seen a meeting of swan queen and prince as casually and naturally regal. Hecquet was so unhysterical and Bezard so unfazed and both so formal that this version of the encounter – and what followed — made perfect dramatic sense. The force of their gravity had simply pulled them into each other’s orbit.