When flights of angels sing. Forsythe and Brown for the Paris Opera Ballet. 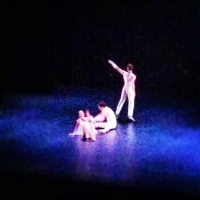 Has he attained the seventh degree of concentration? (G.B. Shaw, Heartbreak House, Act 1)

On Tuesday night, I think the Paris Opera’s dancers did.

I start with the second piece, O Zlozony/O Composite physically composed by Trisha Brown. As I expected, those around me alternated between slumping back in their seats and keening forward. The audience dances a connect/disconnect on their part too! Quite often, those sitting react more to the music than to the dance. But this once, I leant forward all the way through because of the way the music was danced to.

I somehow had felt left out in the cold by the first cast I saw on Dec. 6: Aurelie Dupont, Nicolas LeRiche, and Jéremie Bélingard. Perhaps this trio intended to create a mood which could only emphasize my winter? But as I sat there in the warm dark of the Palais Garnier my only thought proved to be about how I would soon have to head out again into a cold and solitary early winter’s night. The trio looked as pretty and as icy and as disconnected as snowflakes. I could swear I saw snow abstractly represented on the backdrop.

But on Tuesday night suddenly van Gogh’s Starry Night seemed to have enveloped the back of the stage as another almost-new cast orbited in response to a sheltering sky and lifted me up and away from this cold world. Straight-faced – as modern/contemporary demands — but not deadpan. Lost in their own thoughts, this trio melted the snow without having thrown any obvious flames in that direction. Suddenly, I didn’t give a flying fuck about the soundtrack’s irritating and repetitive “brrrd.”

1) Aurélien Houette’s subtly menacing brawn added a wryly poetic mystery to the weird aura that Milosz’s poem already fully embraces. He played against the piece’s potentially glacial prettiness. He embodied a man, a man who moves as he wishes, a man of slowly burning fires. A man with issues and suppressed stories to tell.
2) Jeremie Bélingard, who seemed somehow an outsider filled with an unnecessary fire or hope for warmth when dancing with Dupont and LeRiche here found his place. I know, I know, narrative has been out of fashion in modern dance since, like, forever. So Bélingard keeps his marvelously expressive face quite still, as the task requires. Yet the way he moved and physically reacted to both of his willing partners implied that he certainly had invented his own internal monologue. One which both partners – equally concentrated on their own ideas – somehow understood this time around. His every step seemed to stem from some deep logic, a driving force. He wanted to say something to his partners, to us. And the audience heard him.
3) Muriel Zusperreguy made herself as weightless as a feather in these two men’s calibrated arms. Her unselfconscious femininity has already pleased me many times. The way she allowed the trio to turn her into a graceful yet unpredictable Calder mobile made me think “Aha, New York.” She, too (and how do you do that through a relevé?) let us out front know that she might just have found what she’d spent a lifetime looking for: someone(s) she can trust with her life.

This time, instead of random snowflakes, I found myself fascinated by the stately revolutions of three planets: Houette’s Mars, Bélingard’s Mercury, and Zusperreguy’s…Venus.

Goddesses as well could be found in the Forsythe pieces:  Amandine Albisson — whose superbly proud and juicy Venus had made last season’s Ratmansky Psyché watchable — Sabine Mallem and Marie-Agnes Gillot pulled the audience into their orbit by offering up their wide and true port de bras which made them all resemble proud eagles in flight.  Particularly Eleonora Abbagnato (too rarely seen in Paris as of late) seduced the audience with her rallentando swishes of arms fore and aft in Woundwork. When in focus, Abbagnato always proves as energetic and poignant as anyone’s choreography encourages dancers to dare to be.

Perhaps because Zusperreguy, Houette, Bélingard had reminded me to look and listen and trust my feelings I suddenly, thirteen years after the premiere of Pas./Parts, realized why it has always made me feel at home. During Tuesday’s performance, the music, and the dances, and especially the dancers, sent me back to New York during the long summers of years long gone by. A walk on the West Side in the 1970’s would have taken you to streets overcrowded by kids playing jacks or hopscotch or fighting the way only thirteen-year olds know how to mess up. Watching Pas./Parts, I started to hear not only bubble-gum popping, but to realize that I was hearing snippets of all those kinds of music that once had blared from open tenement windows – yes, the cha-cha, but also a celestial albeit random mix of boogie-woogie, polkas, rock, bits of classical…This ballet, even if from 1999, turns every dancer on stage into a potential John Travolta. The entire cast that night, through its youthful and reckless energy, asked us to play jacks with them. I loved them all, but particularly appreciated the live-wire energy of the very young Emilie Hasboun. Like every one the school produces, of course she has spectacularly assured technique. But not all of them seem to attract the eye, to refract the light, and to glow like a starry night. She does.

For me, all the dancers this evening illustrated two lines from a poem so rarely considered nowadays (perhaps because, um, it’s a bit overheated) Longfellow’s Evangeline: Silently one by one, in the infinite meadows of heaven /Blossomed the lovely stars, the forget-me-nots of angels.

Commentaires fermés sur When flights of angels sing. Forsythe and Brown for the Paris Opera Ballet.