A Very Biased Aperçu (there is no plot to summarize) of the pairing of Jerome Robbins with Mats Ek: buy your tickets now?

I hate visiting apartments with perfectly designed yet sterile décor, not a book in sight. Worse than that, a book unread chosen for its beautiful binding. I hate “high concept” evenings at the ballet even more. This season has proved more than irritating due to its tacky/cheaply conceptual programming: ooh, let’s do the opera and ballet versions of Cinderella and Manon. All that results in are confused patrons who wind up at the wrong theater for the wrong art form (I witnessed that).

Programming a satisfying double-bill should also be considered an art. Handled with care. Phedre and Psyche earlier this season didn’t work for me, either. Yes, gods wreak havoc on humans. So what’s the bigger connection?

The adorable Horst Koegler summarized “Dances at a Gathering” as…”a ballet about the feeling of togetherness.” Joyous yet delicately melancholy. Pairing it with “Appartement” – a cruel and violent dissection of the cost of remaining alone (that head stuck in the bidet, that man wrestling with a couch)sets up an overly violent contrast and does both of these great works a wretched disservice.

Moreover, Lefevre’s rather wry justification of her choices on the Opéra’s official website –  « ils dansent ensemble » [they dance together] makes me want to have a relationship with a gas oven.  Well, yes, in general, dancers do indeed regularly dance together on one and the same stage…and to then illustrate this point with a clip from « Appartement, » where not a single one of the five soloists interacts with the other, indicates a rather cavalier attitude towards the intelligence of the paying audience.

As Christopher Fry makes a character howl in The Lady’s Not For Burning: just  » Where in this small-talking world can I find/A longitude with no platitude? »

I know of many who are already planning to pay full price to watch “Dances” and then leave and go get dinner during “Appartement.” Fine for the box office, but cruel to the dancers, who try to give us all they have to give and find themselves in a half-empty house.  Especially as one of the unsung virtues of this strange programming is that both pieces require large casts to perform little solos as if in a « tasting menu. »  One of the pleasures these evenings might offer would be to discover a dancer — up front for even thirty seconds — whom one had never looked at before.

“Dances” was created on and for strong and mature personalities – at NYCB for Kent, Leland, Mazzo, McBride, Verdy, Antony Blum, Clifford, Maoriano, Prinz, and the unstoppable Eddie Villella – yet the Royal Ballet’s version shortly thereafter proved equally powerful. Yes, Nureyev of course, and then others whom you never realized they had it in them: Ann Jenner, for example, glowed. Robbins had somehow picked up on “l’air du temps.” On both New York and London dance stages, the late sixties and early seventies were filled with expressive artists who remained underappreciated – especially those who were female – caught painfully out of the spotlight due to the public’s obsession with Fonteyn and Farrell.

All you need to understand “Dances” is to take a good look at the huge painting (over 16 feet-more than 5 meters-long) that hung for over thirty years in each of Patrick O’Neal’s succesive Lincoln Center venues (call it Saloon/Baloon/ or restaurant).: “Dancers at the Bar” by Robert Crowl, ca. 1969.* It gathers together 33 dancers and dance-loving people (including the conductor Robert Irving, who is the one who convinced me that Minkus’s music isn’t all that bad if played as if it were music). 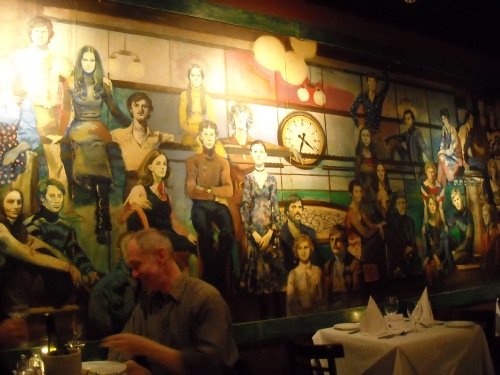 In the painting, several members of the first New York and London casts of “Dances” stare down at you: the elegant Monica Mason and tender Antony Dowell, the uncategorizable Lynn Seymour and the ever-underrated David Wall, along with the beautifully eccentric Leland and the handsome Prinz…while others just pausing on their ways to ABT or Stuttgart join them. This painting unites a pantheon of lithe and tired dancers just waiting, waiting, to shed their street clothes and transform themselves into whom they really were meant to be. 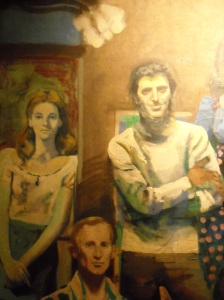 Up until now, Paris also drew upon its strongest company members to make these very fragile masterpieces work. If you can’t tell them apart, the person next to you will soon be asleep (as I witnessed at « Dances » when NYCB passed through a dull phase. In the first row, that shouldn’t be possible).

These ballets could offer an ultimate thrill:  nothing is more satisfying than having a dancer force you to change your preconceived notions about what they can or cannot do.  Don’t let them become pretty books unread.

* Unfortunately, even flying to New York won’t allow you to see the painting anymore. Donated by the O’Neal family to NYCB after the last of their restaurants closed recently, it now hangs in the main rehearsal hall in the New York State Theater (which some now insist be called the David Koch Theater). Perhaps some day it will be placed in one of the public spaces of the building. For further information about the painting’s story, see Doris Perlman’s article in a 1997 issue of the American Dance Magazine.