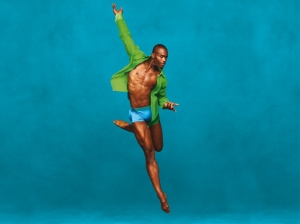 Alvin Ailey’s company brings the Paris Opera Ballet’s dancers to mind. You can relish how their respective teachers and coaches have a coherent vision of a similar and specific style. Both troupes share powerfully-rooted épaulement that spreads up from the deepest part of the back of the spine and spirals out. Their arms work as endless extensions of expressive shoulders. The head belongs completely to this part of the curve. This then connects down to grounded supple feet and legs completely controlled even as freely released from strong and relaxed hips Nothing self-conscious blocks any source of energy. Such full-bodied dance convinces you that this is the natural way to be, to live, to breathe. Such dancers provide the key to expressing what music and choreography yearn to make us feel. Neither company panders to us, but asks us to share in their delight of movement. Nothing is “now I do the gymnastic extension you expect and approximate the rest.”

A fully-inhabited body can prove ferocious.

Despite being danced more than full out and with total commitment of body and soul, the three choreographies for this evening however — each ostensibly about a spiritual journey — gladdened me less.

“For my part, I travel not to go anywhere, but to go. I travel for travel’s sake. The great affair is to move.” [R.L. Stevenson, “Cheylard and Luc.”]

“Lift,” by Aszure Barton, started to weigh on me quite quickly. The program notes celebrate her “unique working process” which involves talking to the dancers (that’s unique?) and her rejection of “ideas” in search of “atmosphere.” (Um, yes, the lighting was quite complicated and often dark and smoky). What I watched seemed to be a super-professional-level dance class that had started around a collegial camp-fire. Everything was group movement (“Line one please, then line two.”) with a few people stepping out to stamp out a marshmallow – vibrantly, but never distinctly enough for me to say: “ ah, there is a specific persona embodied in a step.” Mostly the goal of the movements seemed to be about how to leave the stage in a rhythmic and sculptural way. Slap your thighs, step together, go off; step together, go off. Slap your thighs. “Go, go, go!” danced with absolute authority and clarity and belief.

One moment would prove to be a rare one in this evening of high energy and zero adagios (even if at least one section of each of the scores – commissioned soundscape for Barton, “various composers” for the others — could have afforded more of such moments). A woman planted the crown of her head into the torso of a man blocking the exit stage left. What happened evolved slowly and horizontally to stage right. Something started to happen. Then it was gone. 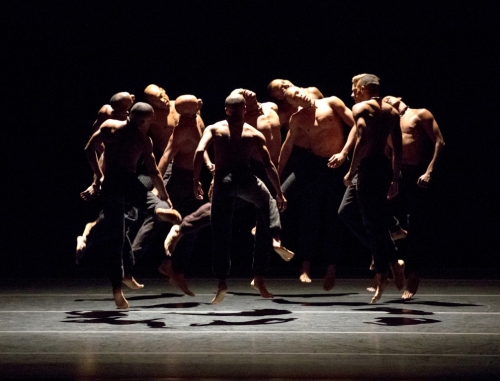 “Exodus” by Rennie Harris, the sweet-heared guru of theatricized street dance, remained a group project. Alas, with a gunshot to start and a gunshot heard at the end, this piece is of its time. Bodies are lazarus-ed by a man at the outset and then get domino-ed at the end. The lives of each, again grouped, sometimes tremulous, then relentlessly pursued, all got mixed into the same soup. A calm moment of communal embrace, broken down for once into all kinds of couples, let us focus on the utter beauty of this company’s arching necks and warm arms. And made me think: hey, two ballets in and not a single nice and juicy and long pas de deux? So that’s why I was both fascinated by the group aesthetic but reluctantly bored out of my skull. Like the audience, I just loved the “up off the solid ground” energy the performers offered. But I wanted relief from group-think. I wanted intimacy. 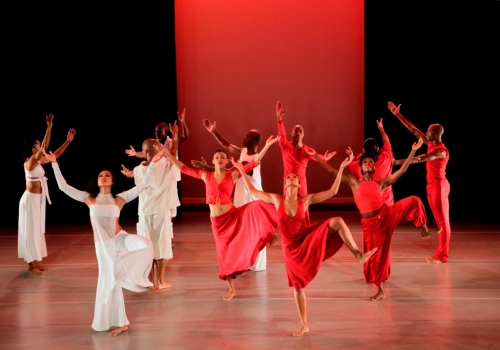 I was starting to die inside. This was getting way too 60’s in the “we are all brothers and sisters and individuals don’t matter” groove. (Have you noticed that I have not mentioned a single dancer so far?)

Thus we got to Ronald K. Brown’s “Grace” from 1999. Groups again. Whether the costumes are white or red, this piece is mostly as horizontal as a Muybridge sequence. Yet it plays around and manages to be less earthbound than the other two that went before: sometimes, they juuump. But then again, even when the music is slow, all is about dancing as full out and as fast as you can all over the place. Too busy, even if at one moment the dancers finally do embrace.

“Between idea/ and the reality/ Between the motion/ And the act/ Falls the Shadow.” [T.S. Eliot, “The Hollow Men.”]

I certainly understand how the company’s director, Robert Battle, has fought to find a new balance where the troupe is no longer beholden to nor eaten alive by the endless repetition of Ailey’s ballets. Nor to seek “stars,” but to cherish a troupe. We must not live in the past. But an entire overheated evening where dancers rarely touch each other, lift off of each other, interact more than in terms of a glance and a smile and a small push and the occasional clumping together proved too…democratic.

Upon returning home on the full metro this Saturday evening, I caught myself – just in time before they noticed — staring at a clump of partying young kids. Their voices were loud, but their bodies listless and heavy and pulled back and away from each other. I pitied them and wished they could discover what their feet and spines and arms could really feel…that they speed up, dig in, slow down, and start to understand the glorious muscles and bones they had been blessed with.

A fully inhabited body can prove ferocious. But even so, it needs another, not just a crowd.