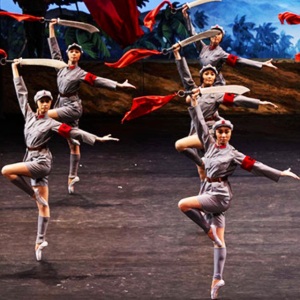 You’ve seen the poster umpteen times in the Paris metro by now:  the Swan Queen and a uniformed Passionaria facing off, their respective hindlegs raised up and delicately curved (a pose inspired by Giambologna’s Renaissance bronze of Hermes…the figure’s attitude was then adopted by Louis XIV’s dancing court at Versailles as the epitome of an elegantly poised position).

But the young woman on the right-hand side of the poster, the one wearing the rebel cap, stares at the world of ballet with steely eyes.  From her, and Madame Mao’s, point of view swans and ballerinas – from Leda to Odette/Odile – have always been silly geese, an easy metaphor for eligible/available/pliable young women. Why are artists perpetually fixated upon our bourgeois obsession with love? Why can’t we reshape dance to serve the revolution? Why can’t dance – even in toe shoes — be about brotherhood instead?

This ballet IS a face-off.  Collectively constructed and composed in Mao’s China of 1964, the Red Detachment of Women is supposed to provide answers to these questions.  It challenges the conventional way we have structured and told stories again and again and again in epics, cinema, poems, novels, opera, ballet – all media, indeed — since the beginning of time.  This ballet means to enlighten us to the fact that class issues, not personal romantic distractions, are what really matter in life.  How long has it been since you read a book or watched a movie that didn’t talk about love?

Unfortunately, this particular ballet is now about as “mod” as the Beatles. But we should take a look before we lade it onto the trash-heap of totalitarian-era kitsch. This period-piece documents an attempt by brilliant dancers trained in the classical tradition to keep the “decadent” art they loved alive during an era when the powers that be had deemed ballet pointless and worthy of extinction.

In the 1960’s and 1970’s, Swan Lake and the rest disappeared from the national repertoire in China, and only a handful of radical ballets, including this one, got to be performed unto exhaustion.  But this ballet (and it certainly is one) has evolved into a nostalgic totem for an older generation for a rather poignant reason.  The uniform of the Red Detachment – hot pants, bare legs, bobby-socks thrust into pointe shoes – while certainly intended as macha, provided a rare moment of regime-sanctioned cheesecake in most serious times.  Sous les pavés, la plage!

The action takes place during the Chinese Civil War.  Everyone in the audience knows that the People’s Republic of China is about to prevail. Beware, evil landlords everywhere, especially on the first of the month…

Our reluctant heroine/Wu Qionghua, tied to a pillar, struggles furiously to free herself.  A poor peasant girl, she has been singled out by the Evil Landlord/Nan Batian as one juicy and strong enough to be sold into slavery at a good price.

When the Evil Landlord’s Henchman/Lao Si tries to ready her for market…she escapes.

SCENE ONE, later that night:

She doesn’t get that far into the forest and the Evil Landlord Nan’s henchmen knock her out.  When the skies open and a violent storm erupts, the Evil Landlord and his minions flee, convinced the girl is dead.

Two innocent-looking men cross the stage.  But they are RED ARMY WARRIORS in disguise.  Hong Changqing/the Officer and Xiao Pang/the Messenger stumble upon the shattered Wu Qionghua.  She mimes/tells them about her miserable life.  They can only offer one solution:  to join in their crusade.

The people and the rebel soldiers rejoice: a women’s revolutionary cell – the Red Detachment – has been created.  Their stylized training exercises remind us that ballet requires as much rigorous discipline as any “masculine” endeavor.  [The original cast actually underwent weeks of military training in order to lose their “SwanLake-y” softness).

Wu Qionghua arrives and denounces the crimes of her evil landlord.  Hong verifies her account.  As newly appointed commissar of her unit, Hong welcomes our fervent heroine to the “Detachment” and gives her a gun.

Hong, disguised as a rich merchant, has crashed Nan Batian’s birthday festivities.  Nothing could possibly go wrong.  At the sound of a gunshot at midnight, the women’s brigade will strike and annihilate the landlord and all his kind.

But Wu, unfortunately, totally messes up.  When she stumbles upon her former tormentor she cannot resist this chance to try out her new gun.  Not only does she miss her mark and thus allow the evil landlord to flee, but by letting her gun go off she has prematurely given the signal to attack.

While evil has not been wiped off of the face of the earth tonight, at least the rebels manage to seize the landlord’s hoard of grain. They redistribute it immediately to the poor.

Hong critiques Wu Qionghua for her ridiculously emotional behavior, unworthy of the warrior she must strive to become.

Hong lectures the female division about the importance of discipline, of self-control, a lesson our ever less reluctant heroine takes to heart.  She now understands that she must fight not against HER landlord, but against ALL landlords.  She must leave her ego, her past, and her pains aside. Only then can she become an effective instrument of “the people.”

She has transformed herself into Hong’s best comrade-in-arms. This, then, is what true love is about: community.

As one big happy family, the peasants and the Red Army Soldiers, share their joy.

When the Evil Landlord’s minions attack a recently liberated zone, the entire village heeds the call to arms and heads off to fight for everyone’s freedom.

SCENE FIVE, in the mountains:

The Red Army tries to squeeze the enemy and cut off its supply lines.  Hong, trying to protect his unit, is wounded and captured.

But so does the Evil Landlord (much less heroically).

Blue skies chase the clouds away.

Qionghua takes over for Hong and humbly agrees to become Party Commissar.

Peasants and soldiers and audience now must join in singing “The March to Victory.”