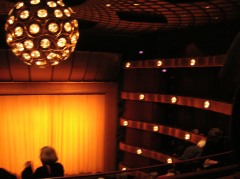 It is not possible for me to be unbiased when it comes to Pina Bausch’s Orpheus and Eurydice. I first saw it when I was one of those third year girls. “You know, American college kids. They come over here to take their third year and lap up a little culture… They’re officious and dull. They’re always making profound observations they’ve overheard.” Yeah, guilty on all counts, BUT I did manage to “lap up a little culture” as Jerry Mulligan so dryly notes in An American in Paris. I fell in love with Paris, and more specifically but certainly not exclusively, its ballet. Orpheus and Eurydice was the first time I saw the Paris Opera Ballet, my first opera, and the first time I saw a performance at the Opera Garnier; obviously Orpheus and Eurydice holds a very special place in my heart. Honestly, though, I don’t remember a lot about the ballet itself; at this point I had stopped dancing completely for three years (it would be another two before I was forced back into class kicking and screaming… another reason to love Paris) and hadn’t begun my ballet history education. I hadn’t heard of Pina Bausch; more seriously, I can’t swear to even knowing who George Balanchine was. Yeah, that level of ballet history education. Here’s what I do remember thinking: “This is awesome.” Also, I was so distracted by the beauty of the building that I almost fell down the main staircase on the way out. Well, I’m still that clumsy, but I’d like to think I know a bit more about ballet now than I did four years (seriously?! Four years?!) ago.

So, the verdict from years later? I loved it, really. However, I don’t think this is something that I would get excited about seeing every year. Emotionally, it’s heavy and sometimes hard to get through; you do not come out of that theater uplifted, at all. Yes, the dancing was gorgeous (for the most part, more on that in a moment) but, at least personally, I was way too caught up in in the overall feeling of the piece to notice a lot of choreography. Most strikingly, in Bausch’s mind, is there a difference between mourning and peace? Because that choreography seemed eerily similar. For Bausch, it seemed like peace is more the absence of external stimuli than an emotional state originating from a person. Everyone in the Elysian Fields was a zombie. I could more readily accept that idea in Mourning; that level of grief (for a dead spouse, just for example) can numb you completely and take you out of this world, but peace? The Elysian Fields are where the ‘good’ souls go. Growing up with the idea of Heaven and Hell (paradise vs. eternal torture) it was strange to see a ‘Heaven’ filled with yes, peaceful, but also empty souls, especially after seeing how awful Hades was. Eurydice was no exception to this; she recognized Orpheus and took his hand, but it wasn’t until halfway between the underworld and the mortal world that she started caring. Oh, but when she cared… That was some truly gorgeous dancing.

What I really did love was the idea of circles. We begin with Mourning, moving through violence and peace (both stages in the mourning process) and end with? Death, more mourning. You could almost take the whole ballet as a meditation on the grieving process and even on the life’s cyclical nature. We begin with grief of the deepest nature; in the opera Orpheus literally uses his wife’s name as a cry of pain. We see the Violence (second movement) and anger of losing someone, and in this case, Orpheus’s determination to get them back. Peace, at least for Eurydice, when tragedy is accepted; Orpheus knows no peace until he, too, dies. Is this Bausch’s view of life? True peace only in accepting death? Finally, death, a final one for Eurydice and Orpheus’s first. One part of this movement that I really loved was that it was Orpheus’s singer (since he is a musician, I took this to be his soul) that embraced Eurydice when he’s ready to die while Bullion hunched with his back to the audience. At that point, his body didn’t matter; it was his soul that was still bound to life. Once the soul gave in, the body/dancer was allowed to die. When he did die, the choreography from Mourning was repeated, but by one of the dancers playing Cerebus, suggesting that even the guardian of death was grief stricken. Yes, I loved this ballet, but maybe give me another four years?

Gillot as Eurydice was perfect casting; with her long limbs she reminded me of a spider, but in a good way, the best way really. Her lines simply do not end, and the expression she gave to Bausch’s movement made me believe the ballet had been choreographed just for her. In short, glorious. I wish Eurydice danced more.

Bullion, well… I’ll just say I was unsurprised. What is it about him that fails to inspire? I don’t quite understand it. He did everything tolerably well (wobbly pirouettes but whatever, I can overlook that), but he just felt so blah. This ballet is about the most beautiful musician ever to live who loves his wife so much that he literally goes through Hell to find her and bring her back, only to lose her again. Plus, he does it all wearing beige underwear. There is no part of that description that should make anyone go ‘eh’ and yet, he did! That’s actually kind of perversely impressive.

To make the evening a bit more challenging, The State Theater is not an opera house anymore, which means there were no sub or supertitles. Thank goodness I had a cheat sheet for the plot, because I think I would have been very lost (Everyone in Hades yelling NEIN! was pretty obvious, but my German stops there.) However, as much as I would have loved to know the exact words, not having a translation made me really focus on what was trying to come through in the choreography and how the music was sung. The singer for Orpheus repeating ‘Eurydice’ over and over in the beginning was touching and Eurydice’s singer was as close to an absolute meltdown as you can get while remaining beautiful, and Gluck’s music really is beautiful. I almost like not having the words flashing in front of me as it would have been much harder to simply watch and absorb everything. All in all, a wonderful finale to the summer ballet season here in New York. See you all for NYCB on September 19.

Incredibly appropriately, I’m seeing the Greek trilogy: Apollo, Orpheus and Agon before jetting off for Paris to see the Paris Opera Ballet do… Balanchine. How perfect a circle is that?