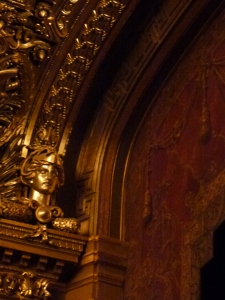 Brrr, it’s been cold in Paris. But if you want to really feel your soul freeze and shrivel, run to see the sextet of singers studiously navigating around their icy, pointless, and smoothly dancing avatars (not from the Paris Opera Ballet, but ATDK’s imported folk) in this new production of Così Fan Tutte.

This opera is supposed to be about how easily we misunderstand life. How badly we know each other and ourselves, yet how fiercely we yearn for human warmth, for certainty, for love. Mozart was born to teach us how to laugh in the face of those blizzards of emotion that can temporarily blind us to, oh, just about everything we lie to ourselves about. In this new production, Mozart turns out to have left the room…

Nothing ever happens to any man that he is not formed by nature to bear. [Marcus Aurelius, Meditations, Book V, 18]

If Mozart’s music and Da Ponte’s text both nudge us to dare to live and learn from our mistakes, this staging concentrates upon testing the audience’s capacity for stoic attention. Thought and craft get yoked to a nice, clean, predictable – and very monotonous – exercise. The staging refuses to invite the audience to in. The fault must be laid at the feet of the choreographer and director, Anne Teresa De Keersmaeker. And perhaps at those of Philippe Jordan, who delivered a most odd, dry, and percussive reading of the score.

All things from eternity are of like forms and come round in a circle. [Book II, 14]

The blindingly white and empty set — from the white Mylar floors traced with a few symmetrical circling patterns (remember fooling around with a “Stylograph Kit” as a child?) to the plexiglass side panels that echo a bare lightbulb’s light, to the whitewashed fire-screen upstage – while harsh, might still have provided a magnificent big space to fill with movement. Alas, that was not to be.

So what happened? Small happened.

At the end of the overture, the entire cast marched in — right in step to the music — parked itself crisply downstage on the stencils, and then swayed in a semicircle – some with mouths open, some closed — for about twenty minutes.

You see, “the concept” is that each singer is assigned a dancing avatar, an echo, a shadow: like the Anna 1 and Anna 2 in Kurt Weill’s “The Seven Deadly Sins.” OK, parallel worlds. But then don’t just plop each singer downstage to stand and deliver. Is that old-fashioned staging or what? If on top of that you add dancing shadows that barely interact with anybody while making moves intended to be vaguely illustrative, distance on the part of the viewer soundly sets in. I found myself resorting to the supertitles: the words flashing above the stage provided so much more drama than what was spread out down below: a tiny alphabet of steps at a loss for words.

The flaccidly-conceived stage action radiated no one’s id, no one’s ego. All of the dances or dancelike steps by anyone involved, whether tied directly to a singer’s line or to an orchestral flourish, were relentlessly “on the beat” and scrupulously mild. In the end, the warmth of a singer’s voice sometimes prevailed. But should you ever feel the urge to watch puppets who really know how to make their bodies sing, let me suggest we reserve tickets for an evening at the Salzburger Marionettentheater.

Whatever this is that I am, it is a little flesh and breath, and the ruling part. [Book II, 2].

As the evening wore on I began to imagine branding what I was seeing as the Isadora Duncan 9.0 Etch-A-Sketch kit: find that solar plexus, sway and swoop your upper body, lift your arms and now sway side to side bigger, walk-skip-shimmy, bend your knees (for the singers especially), or sweep your bent legs backward like a skater on dry land (that’s Don Alphonso’s avatar). Return to your place and stand around. Slowly collapsing to the ground by singer or dancer proved the Great Big Leitmotif. At one point during tonight’s performance, I completely spaced out on both singer and dancer during a major aria and let my eyes close. When I reopened them, I rediscovered the pair lurking near the same marks, swaying pleasantly, still stolidly ignoring each other as before.

Movement got mildly more engaged and a bit more individuated during the second half. A double did something wildly new. But, alas, it turned out to be “I can’t get the goddamn lawnmower to start” (bend down, pull one arm up hard, repeat, repeat). OK, that could be some kind of physical metaphor for frustration, but when this is all you remember in sharp outlines from a performance only a few hours later, that’s probably not a good sign.

Many a contemporary choreographer has taken a simple concept and simple steps and made a stage fill and shimmer in unexpected ways. But this basic vocabulary of steps, repeated with careful and skilled monotony for three ice-bound hours stuck in my craw. It was like an evening at a chic restaurant spent repeatedly staring in disbelief at the appearance of yet another tiny emulsion stranded on a big white plate.

Remember this, that there is a proper value and proportion to be observed in the performance of every act. [Book IV, 35]