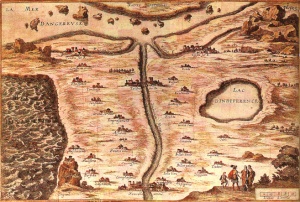 Music: Mozart and Goran Vejvoda.
At the Palais Garnier.

You are in Paris now, a perilous yet exhilarating place. Surely, you expect to find romance. Maybe in a park, under the shade of a tree? But what do you really want? Love or sex? Reason or emotion? Are they mutually exclusive? A meeting of the minds or…And just how much of yourself are you willing to surrender? These are ageless questions.
Fascinated by the great early novels of 17th and 18th century French literature, Angelin Preljocaj tried to see whether such a verbal genre could survive translation into the language of movement. Les Liaisons dangereuses, La Princesse de Clèves, Mlle de Scudéry’s Clélia, and the plays of Marivaux, all charted the treacherous journey which might connect your heart through your brain to the rest of your body. At the time, artists even drew maps of this untamed wilderness: relationships depicted as a landscape littered with land mines. When trapped between the dangerous Sea of Passion and the Lake of Indifference, are trust and tenderness even possible? Do lovers ever truly know or understand each other?

While the ballet is danced in one blow – 1:40 minutes and no intermission – conceptually, the ballet is set up into three sections:

Each section begins with a weird, stiffly-moving, coven of Gardeners. Are they fate? Are they the rigid rules of society? Wearing welder’s glasses and butcher’s aprons, are they hiding from the light of day or does this indicate that love is blind, scalding, fatal? Their music will sound like a train wreck or the repetitive grind of a factory assembly line: are we ever in control of such events? In a harsh and stiff way, they map out the very gestures and movements that will follow. Notice that the “garden” is carved out of steel and wood beams. This “park,” this “landscape of love,” will have sharp and painful edges.
Suspicion/Flirtation. The company assembles around a game (is it only a game?) of one-upmanship and musical chairs. He checks out the available women (en travesti, a wink at Marivaux) while She feigns indifference. But He has noticed Her. Despite the ordered surface, the disorienting game of seduction has begun.
The first meeting/Temptations (Pas de deux/duet #1). He is ardent, She apprehensive; but both quickly realize that they are in synch. The two of them “talk” but hesitate to touch…until she faints. They struggle to remain true to – and break out of – polite society’s rules.

Gardeners again.
Delicious bait. The women, having discarded some clothing, cheerfully anticipate being loved some more. She, in a bright red gown, is curious but apprehensive.
Desire. Four men arrive on hands and knees as if desperate. He is one of them, yet soon happily finds another woman to flirt with. Those men who don’t get so lucky dance out their frustrations.
The second meeting/Resisting (Pas de deux #2). The gardeners bring Her to a grove in the park. As hard as He tries to impress her, She resists. While he seems to be offering his body and soul, she fears the consequences. Perhaps she could surrender only her body but not her soul ?

She is trapped in a nightmare, manipulated by the ice-cold gardeners.
Regrets. Late at night, the women lament lost (or dead) lovers/loves.
Passion. He, aflame with desire, goads the other men on.
Weakness. A second too late, some of the men realize just how much women can/will depend upon them. While seduction may on occasion result in a man acquiring a “ball and chain,” for all women all the possible results – including childbirth or death thereby —  leave a deeper mark on their bodies.
The Third Meeting/ Surrender (Pas de deux #3) In French, the title is “abandon.” As  They dance, the steps they once did side by side merge into one. This is truly one of the most magnificent statements about love — that flying kiss! — but do any of us really believe that love can last forever?
EPILOGUE: As the sky blackens (the storm approaches?) the gardeners have the last word.